Near double-digit growth, global takeovers by Indian companies and massive payments being made to cricketers across the world by the Indian Premier League (IPL), seemingly sign's of prosperity and all-round growth. However this growth is not uniform, there is an 'India' which is surging forward, but there is a 'Bharat' which continues to be home to one third of the world's poor.

India is the world's second most populous country, ranked 128th out of 177 countries on Human Development Index, with an estimated population of 1.13 Billion in 2007. According to UNDP, 28.6 % of these 1.13 billion people live below poverty line and in terms of absolute nos. it is a staggering 323 million people. Not surprisingly India ranks 128th out of 177 countries on the HDI (Human Development Index). 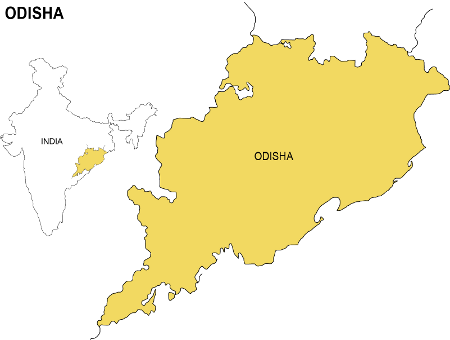 Odisha is one of the poorest states in India and regularly suffer from natural catastrophe leading to further suffering to vulnerable and resource poor populations. A staggering approx. 18 million people (47.15% of the population) earn less than 10 rupees (0.16 Euros) a day - it is hard to comprehend how people can survive on such a pittance. Of course it is a fact that many do not, or have to take extreme measures in order to meet their most basic requirements. Stories of this despair from Kalahandi (Odisha) formed the headlines in media for years.

Against this backdrop of extreme poverty, the Government of India has sought to introduce a series of Social welfare schemes and programmes to provide minimum support for its poorest citizens such as Old age/disability/widow pension, food from Public Distribution System, Mid Day Meal Programme in schools, Integrated Child Development Scheme (ICDS) etc. The latest such scheme is the Mahatma Gandhi National Rural Employment Guarantee Act (MGNREGA) which provide 100 days employment to each rural household that demands it. For poor households these social security schemes can provide a vital safety net. Unfortunately most of these programmes, schemes and services have not achieved their objectives owning to poor implementation as well as corruption in the programme delivery system.

Ghatagaon and Banspal blocks are the two most backward blocks of Keonjhar District in Odisha state. Banspal block spreads over a geographical area of 1191.07 sq. km. and consists of natural dense forest and hills. Ghatagaon block is spread over an area of 547.29 sq. km. Both these blocks are home to a large tribal population, of which more than 80% live below the poverty line. The tribal population includes Bhuiyan and Juanga, which have the status of Primitive Tribal Groups.
Concern Worldwide, an Irish non governmental international development agency, working in Odisha has partnered with several development organisations including Women's Organization for Socio Cultural Awareness (WOSCA), Centre for Youth and Social Development (CYSD) and Prakalpa under its Governance and Livelihood with an endeavour towards achieving its strategic objective of promoting responsible governance. 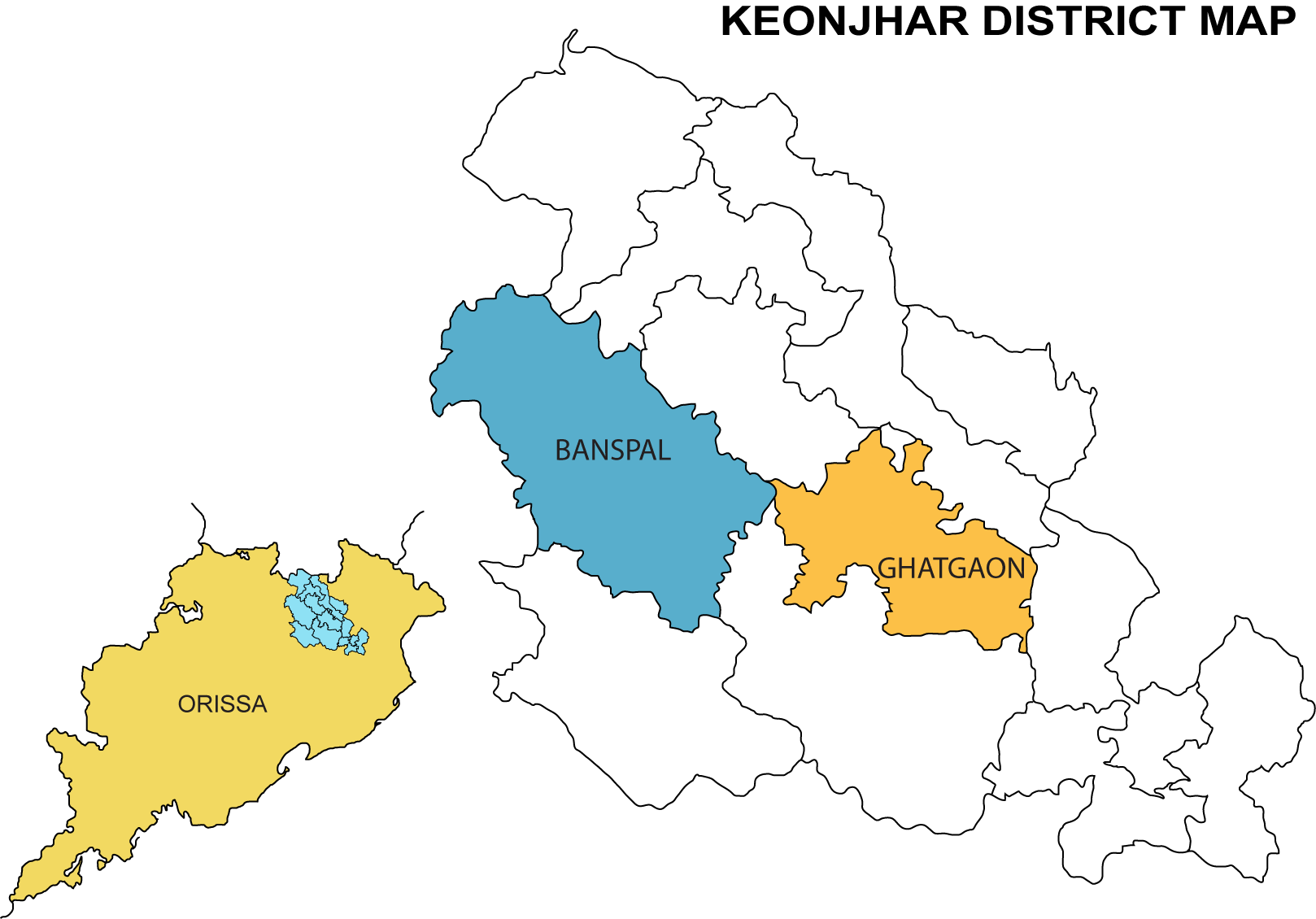 In July 2008 Concern Worldwide and WOSCA partnered with Ekgaon Technologies, New Delhi based socially committed information technology company for conceptualising and implementing the MERComs system in Ghatagaon and Banspal blocks of Odisha. MERComs a social audit platform, is a modular, expandable and localized (in English, Hindi, Odiya) Management Information System (MIS) for NGOs, INGOs and volunteers for monitoring rural entitlements.

MERComs framework developed by ekgaon allows centralised tracking and monitoring of rural entitlements programmes and there status through decentralized field based monitoring units and partners using mobile phone based application with support from village volunteers.
The system captures the transactions, payments, status, availability, value etc. which stands as evidence for the delivery made respectively from / to the entitled members, viz. all the persons being covered or are eligible to be covered under the MGNREGA, Public Distribution System (PDS) and various Pension schemes such as the Madhu Babu Pension Yojana. 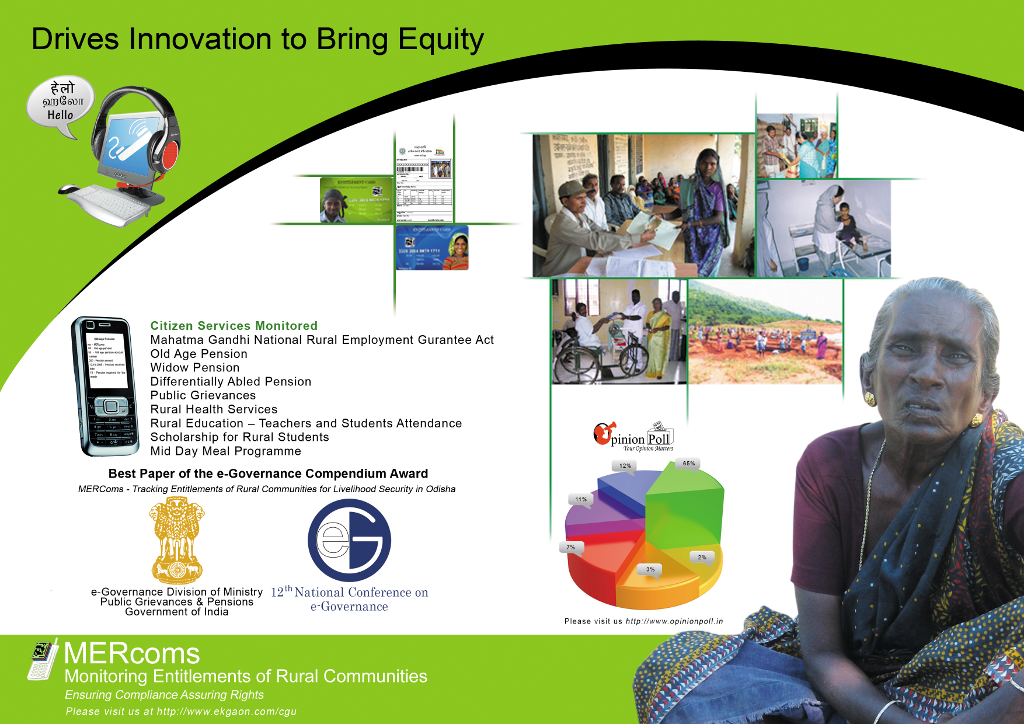 The system has facility to generate wide range of reports for user-defined period, which are shared at various levels of governance of programme and schemes. The solution informs and empowers the people to capture information in real time and push for corrective measures, thus ensuring rights of the people.
To ensure rights and entitlements of the marginalized a regular interface and collaborative action with the concerned government departments and Panchayat Raj Institutions (PRIs) has been established by the project, where MERComs reports are shared.


Government social welfare programme delivery system has been ailing for long and is well recognized within the governance set-up. Former Prime Minister of India Mr. Rajiv Gandhi once said, "Not even 10% of the money released by the government reaches the aimed beneficiary, due to leakages in government delivery system". Taking that, as first benchmark this pilot project is aiming to understand to what level MERComs is able to bring about transparency. The initial results coming from quarterly appraisal reports indicate some positive change.

The primary census for identifying entitlement beneficiary itself identified


The project currently benefits over 44,000 Households in the two blocks covering a population of 240,000, out of which as per primary survey estimates, carried before the start of the project, 100% are eligible for MGNREGA, almost 70% live below poverty line (BPL) of 15% can be classified as ‘poorest of poor’ and 12% are eligible for pension (old age, widow, disabled, HIV positive). Taking these numbers and percentages the benefits that this population is entitled to is 394.16 million India rupees per annum. Therefore assuming that real time tracking is able to eliminate all corruption and leakage under these three social security schemes the potential return on investment is almost 100 times. That means an investment of one Euro is likely to result in a return of 100 Euros to a poor family, this simply by getting the existing system to function effectively.

NASSCOM Foundation pioneered the Social Innovation Honours to recognize excellence and encourage innovation in social development initiatives. NASSCOM Foundation and Genpact presented the Social Innovation Honours for 2010. The annual Honours aims to showcase projects that demonstrate best practices through exemplary use of ICT in areas of social transformation. These Honours are a celebration of innovations that bring about social change and development through the application or use of technology.

The award to ekgaon has been given for the use of information communication technology (ICT) for the social initiative under multi-stakeholder category for its project "MERComs - Tracking Entitlements of Rural Communities for Rural Livelihood Security in Odisha".

The awards given for six categories are one of the most prestigious IT awards in the country. The Grand Jury included Mr. N. R. Narayana Murthy, Founder-Chairman of Infosys Technologies Limited, Mr. T.N. Ninan, Chairman and Editorial Director of Business Standard Ltd, Ms. Rama Bijapurkar, BoG IIM, Ahmedabad, Mr. Jerry Rao, Founder, Chairman and CEO of MphasiS Corporation and Mr. Saurabh Srivastava, Cofounder and past Chairman of NASSCOM and Chairman of the Indian Venture Capital Association.

The award ceremony was held on 9th Feb 2010 at Grand Hyatt, Mumbai, India. Mr. Ashok Chavan, Chief Minister of Maharashtra gave the away the award in a glittering ceremony at the NASSCOM Leadership Summit, witnessed by the top honchos of IT companies of India and world.

The awards recognize excellence in IT innovation for social impact. It identifies initiatives that are making a difference in the lives of millions such as the Mahatma Gandhi National Employment Guarantee Act, that aims at enhancing the livehood security of people in rural areas by guaranteeing hundred days of wage-employment in a financial year to a rural household whose adult members volunteer to do unskilled manual work. However the success of United Progressive Alliance government's flagship job safety programme, has been clouded by reports of leakage of funds due to fake attendance.

Receiving the award, Mr. Rohit Magotra, Chief Operating Officer of ekgaon said "the technology has created not only transparency in tracking social entitlements but we have also proved that effective mechanism for delivery of services through mobile phones. We are looking forward scale the solution through out the country and provide the solution through leading mobile phone service providers".

In some states of North East, it was found that funds were transferred under the scheme to even doctors and engineers. In Uttar Pradesh alone the leakage was estimated at Rs 850 crore, according to a government report. For poor households, social security schemes such as MGNREGA can provide a vital safety net. Unfortunately most of these programmes, schemes and services have not achieved their objectives owning to poor implementation as well as corruption in the programme delivery system.

"MERComs - Tracking Entitlements of Rural Communities for Livelihood Security in Orissa" was given the Best Paper Award of Compendium for the 12th National Conference on e-Governance held on 12-13 February, 2009 at Goa by Government of India.

With NASSCOM recognition the project gets national recognition as one of the best e-governance enabling initiative in the country. It has potential to further scaling up acting as a direct citizen to government interface using their mobile phones to know the status of their entitlements.

Mr. Vijay Pratap Singh Aditya, CEO, ekgaon opinioned "Good governance can be achieved only when the citizen aided by information as power can demand change".

The Government of India is also aiming to enable government services by 2013 to all its citizens, with a massive investment of over Rs 20,175 crore under its National e-Governance Plan (NeGP). In the MGNREGA alone the proposed allocation for next year 2010-2011 is over 45,000 crore, aimed at benefits the poorest in the country.

"Good governance can be achieved only when the citizen aided by information as power can demand change".

The Government of India is also aiming to enable government services by 2013 to all its citizens, with over Rs 20,175 crore investment in its National e-Governance Plan (NeGP). The announcement to this effect was made by the officials during the 12th National Conference on e-Governance at Goa.

Mr. K Sasikumar, Asst. Vice President (Product Development) at ekgaon, reiterated the commitment of the company towards development of technologies that drives innovation to bring equity, he said "a competent technology platform should offer low operational cost and allow scale for wider distribution of services".

ekgaon excellence has been internationally recognized, it also won the Dell Small Business Excellence Award in 2009.